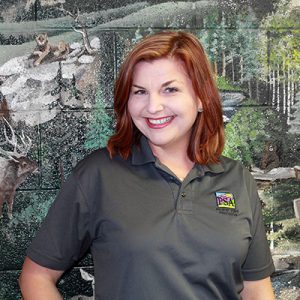 The PSA would like to announce the selection of Dollie O’Neill as our newest Executive Director. We welcome her, and look forward to many years supporting Philmont by supporting the Philmont staff.

Dollie graduated from the University of Arkansas, Fayetteville with a BA in Communication, Public Relations. Dollie played in the Razorback Band and first became a member of Tau Beta Sigma National Honorary Band Sorority. Following graduation, she started her career journey as a National Chapter Field Representative of Tau Beta Sigma, visiting over 130 college campuses nationwide. After her time working for that non-profit, Dollie continued her career in retail management, college recruiting and city government.

For the past 13 years she volunteered for Tau Beta Sigma National Honorary Band Sorority in an elected position on the National Council & Board of Trustees, where her responsibilities included Strategic Planning, budgeting overview, fundraising and capital development campaigns. She has served in multiple positions for her band sorority, most notably as National President. Currently she serves as Chair of the Board of Trustees.

In the Scouting community, Dollie worked at Buffalo Trail Scout Ranch in Texas as the Trading Post Manager and Philmont Scout Ranch Medical Infirmary as a secretary. Dollie began working for the Philmont Staff Association in 2013 as a seasonal summer staff, then in 2014, became our Office Manager. Most recently, she served as Interim Executive Director.

In Cimarron, Dollie volunteers for the Mora-Colfax County Head Start as Chair of the Policy Council and for her daughters’ Girl Scout troop. With her husband and two daughters, she has called Philmont “HOmE” for the past five years.

Dollie looks forward to taking on this exciting new journey as Executive Director of the Philmont Staff Association.