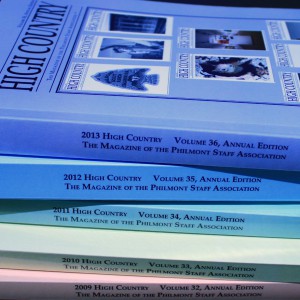 The High Country index has been updated through December 2015. You can find it along with other documents on our members only page or download it directly.

Consult your latest High Country for the latest user name and password.

As part of the next High Country Conservation Special Issue, we’re seeking brief personal essays on how Philmont has shaped people’s lives and connections to the land. We’re especially interested in essays of approximately 750 words that respond to either of these prompts:

One: How has Philmont shaped your connection to the world around you? We hope that these essays collectively reveal how the magic of Philmont transcends the ranch and influences our connections to the land, as well as to each other.

Two: What role did Philmont play in guiding you to a career in a conservation-related profession? We hope that these essays illuminate the diverse impacts Philmont has had on people’s live and career choices—be they rooted in natural resource management, environmental education, firefighting, etc. Through these essays, we also want to expose the Philmont community to the range of conservation activities that people with a connection to the ranch are engaged in throughout the world.

We’d love to hear from you. If you’re interested in sharing your story, please email Mike Sudmeier at [email protected] for additional details.

From the editor: It’s said so often that it’s now clichéd – but nevertheless remains true – that the Philmont staff is comprised of some incredibly talented people. Those talents are displayed in a variety of ways, in diverse media, in traditional and nontraditional manifestations. For many years, PhilNews, and more recently the Philmont Staff Association have conducted competitions for two of those media: photography (PhilNews) and writing (PSA). And several years ago, High Country began issuing a special digital edition devoted to the winners of those competitions…

“We gathered at Registration after breakfast to begin signing in, meeting our guides, collecting food and group gear, buying last minute necessities from the Tooth of Time Traders, and cramming all of the items into our packs.”

“We explored around Baldy Town and took snow pictures. But we spent most of the day in the relative warmth and comfort of the museum cabin, substituting a dinner for a lunch for two hot meals.”

“After dinner our guides gave us two options for the remainder of our Autumn Adventure: hike out the next morning or stay at Baldy town and hike out the following day. The storm had changed the game.”

“About ten inches of snow fell during the night, and the tents looked like snow-covered boulders.”

“Using gold pans as scoops they built a magnificent snowman between the museum and commissary cabins.”

The group that stayed an extra day at Baldy Town.
Jon Thompson photo.

“We hiked the ridge to the remains of the cabin and mine at the base of Baldy Peak, then scrambled the last few hundred yards to the summit. Ominous, dark clouds formed to our west as we took a group photo.”