You have been a big part of the 80+ year history of Philmont! And, like you, many service academy graduates have left a lasting mark on Philmont since USAFA first started sending cadets as Rangers in 1972:

It’s a little hard to imagine today, reading about Air Force Gen. David Goldfein, that he was ever “sittin’ on a mountain in New Mexico, wonderin’ about his life and where he might go,” words he wrote in his song, Boy of the Mountains. For since his one summer on the Philmont Staff in 1980, Dave Goldfein has soared through ever-greater positions of responsibility to the very pinnacle of his profession.

After graduating in 1983 from the U.S. Air Force Academy, he trained as a fighter pilot, and over the course of his remarkable career he served as a flight instructor, flew combat missions in the Gulf War and Afghanistan, survived being shot down by a surface-to-air missile over Serbia, led as a squadron, group and wing commander, and served in numerous senior Air Force and Joint Command positions, culminating retired as the Air Force’s 21st Chief of Staff.

Gen. Goldfein was the guest speaker at the 2019 all-staff banquet before the staff scattered to all corners of the ranch. 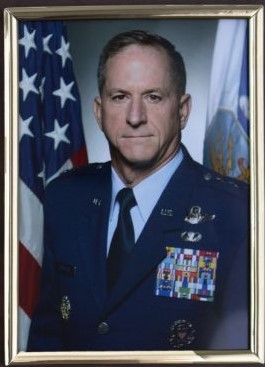 U.S. Air Force Col. (Ret.) Richard Alan Searfoss was the recipient of the Philmont Staff Association’s 2013 Distinguished Staff Alumni Award. Searfoss served on the Philmont staff in 1976 as a U.S. Air Force Academy Cadet Ranger. Warren Smith, who was his Training Ranger in 1976, introduced Searfoss and helped present the award. The presentation took place at the PTC Assembly Hall during the last night of the PSA’s annual reunion. More than 350 current and former Philmont staff members gathered for the event. Searfoss was born in Mount Clemens, MI, but grew up mostly in Portsmouth, NH. He became an Eagle Scout and graduated from Portsmouth High School in 1974. He received a Bachelor of Science degree in aeronautical engineering from the Academy in 1978, then went on to earn a Master of Science degree in aeronautics from the California Institute of Technology on a National Science Foundation Fellowship in 1979. In his introduction of Searfoss, Smith said, “It was clear from the beginning that Rick had what writer Tom Wolfe called ‘The Right Stuff’ and was being groomed for senior leadership in the Air Force. Among those experiences: Rick attended Squadron Officer School, Air Command and Staff College, and Air War College.” Through those years, Searfoss was also establishing his bona fides as a pilot. He was an F-111 pilot and instructor for a significant portion of his Air Force career, though he has more than 6000 hours in 77 different types of aircraft. A turning point in his career came in January 1990, when NASA selected him for the astronaut program. Searfoss became an astronaut in July 1991. On Oct. 18, 1993, he launched from Kennedy Space Center as pilot of STS-58, the Space Shuttle Columbia. Not quite three years later, on March 22, 1996, he flew his second mission as pilot of STS-76, aboard the Space Shuttle Atlantis. In 1998, he went into space a third time, on the STS-90 Neurolab mission, a 16-day flight. By the time Searfoss retired from the Air Force and NASA in 1998, he had logged more than 39 days in space, and he was awarded the Distinguished Flying Cross, one of the Air Force’s highest honors. Since leaving NASA, Searfoss has had a robust career as an entrepreneur, public speaker, and advocate for the exploration of space. To cement his status as a symbol of innovation and adventure, in 2008, he appeared in a Volkswagen commercial. In it, Searfoss had an argument with a black Beetle over who had more engineers, Volkswagen or NASA. In presenting the award to Searfoss, Smith said, “When we reflect on what has made Philmont great, we quickly find ourselves using such words as service, sacrifice, achievement, and adventure. But these are not just ideas and words. They describe a posture and attitude toward life. I can think of no one who more fully embodies these words, these ideas, this posture and attitude
toward life, than Rick Searfoss.”

Cadet First Class Scott M. Manly, Class of 1988, was killed instantly by lightning while leading a back-packing group of Boy Scouts at Philmont Scout Ranch in Cimarron, N.M. on Aug. 2, 1987. Fittingly, it was at Philmont as a Boy Scout himself in 1980 that Scott first identified as a life’s goal becoming a cadet at the U.S. Air Force Academy.

The son of Dr. and Mrs. David E. Manly of Geneseo, N.Y., Scott was born on Feb 5, 1966 and attained his schooling there. At his graduation from Geneseo Central School in June of 1984, Scott was honored as valedictorian of his class and as a National Merit Scholarship finalist. In scouting, which was equal in his list of priorities to his academic achievements, he was a Life Scout and recipient of the Order of the Arrow.

During his years at the Air Force Academy where he majored in aeronautical engineering, he maintained a near-perfect A average in his major and participated in a variety of intra-Academy sports, including soccer and volleyball, both of which he played with real enthusiasm, if not the greatest skill coordination.

At the memorial service celebrating Scott Manly’s life, his father, in a farewell letter to his son, spoke of Scott, the American, whose lover for his country was significantly “Signed, sealed, and delivered the day he committed himself to a live of service to his country in the Air Force, and to the flag that symbolically was draped across his casket.” Dr. Manly also made reference to Scott, the Academy cadet, who successfully proved to his superiors and to himself his ability to “beast it out” through his doolie year and proceed with ever-increasing enthusiasm, pride, and accomplishment to his final, and best, designation as a cadet: First Class.

A memorial fund in Scott Manly’s honor has been established and donations may be sent to the Scott M. Manly Memorial Fund, Association of Graduates, U.S. Air Force Academy, Colo. 80840-5000. Scott is survived not only by his parents, but also by his sister, Kathleen; by his maternal grandparents, Mr. and Mrs. Percy MacVean; and by a wealth of friends and other whose lives he affected positively and significantly during his brief, bit vital, lifetime.

Click here to read about when the US Air Force Academy received the 2012 PSA Silver Sage award for extraordinary service, recognizing 40 years of working with Philmont.

Click here to read USAFA RANGERS A legacy of service at the Philmont Scout Ranch By C1C Patrick Tracy.

This website uses cookies to improve your experience while you navigate through the website. Out of these cookies, the cookies that are categorized as necessary are stored on your browser as they are essential for the working of basic functionalities of the website. We also use third-party cookies that help us analyze and understand how you use this website. These cookies will be stored in your browser only with your consent. You also have the option to opt-out of these cookies. But opting out of some of these cookies may have an effect on your browsing experience.
Necessary Always Enabled
Necessary cookies are absolutely essential for the website to function properly. This category only includes cookies that ensures basic functionalities and security features of the website. These cookies do not store any personal information.
Non-necessary
Any cookies that may not be particularly necessary for the website to function and is used specifically to collect user personal data via analytics, ads, other embedded contents are termed as non-necessary cookies. It is mandatory to procure user consent prior to running these cookies on your website.
SAVE & ACCEPT